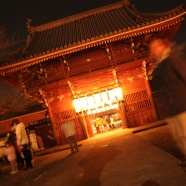 Posted by Claire Usmar on February 23, 2012 in Cultural, Features | Leave a comment

This year’s adventures kicked off on what’s officially known as the last night of winter according to the Japanese lunar calendar.  Setsubun, February 3 this year, celebrates the coming of spring. On this night, people throw roasted soybeans around their houses to drive away evil spirits and ward off bad luck for the coming year.  As they throw the beans they shout, “Oni wa soto, fuku wa uchi” (Devils out, happiness in).  Once you’re done tossing beans, you are supposed to eat your age in beans plus an extra one for good fortune during the coming year. 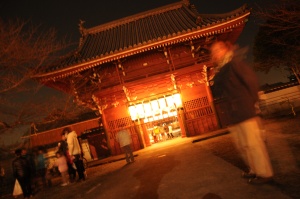 People also visit their local temple on this night to ensure good luck. The temples put on a festival, with foods like amazake (甘酒), a sweet, non-alcoholic by-product of sake, and hold a ceremony where important people in the local community throw goods from the balcony of the temple to the crowds below.  Traditionally, those goods were roasted soybeans but these days they throw all manner of snacks, from mochi (rice cakes) to dried noodle snacks, both locally produced here in Tsu.

This year at a small temple in Hisai, three friends of mine were invited to dress up as oni (鬼 – devils) and join in the snack tossing mayhem.  Yes, mayhem.  One would never suspect that obachan ( お祖母ちゃん – tiny, sweet old ladies) could become so ruthlessly physical.  Competing to catch the tossed goodies is a full contact sport. Young and old come armed with bags to catch their haul in and are not averse to pushing and shoving to ensure they go home with their pockets bulging.  Such is the danger of injury that as the goodies are tossed, someone has to keep repeating over a loud speaker that there is no reason to fight since there’s plenty to go around.  His pleas went unheeded.

I cannot deny that I didn’t fare well myself, but I ended up catching mine incidentally when they rained on my head and camera as I struggled to stop laughing, stay upright and keep taking pictures while the masses scrambled around my legs for dropped goodies. It felt more like I was being aimed at rather than standing in a fortuitous location.  I was after all the only person standing up the entire time and not digging for goodies.

When the free-for-all ended, my friends and I opted for a cup of amazake beside the bonfire to recharge us before we set out for home.  Standing there sipping on the warm opaque drink, I mused how different each of my Setsubun’s had been.

The very first time I visited Japan, back in 2008 while on holiday, I’d gone to a temple in the backstreets of Osaka.  My reason? Certainly not for the cultural experience – I couldn’t really understand what Setsubun was at that time.  More for the free food.  As it was my first night in Japan, rather than using my cryptic Japanese to order some mysterious food at a restaurant, I opted to take a handout of noodles and hot sake on offer at the temple.

My second Setsubun had been my first while living here.  My neighbours and I convinced another friend to dress up as an oni and we’d pelted him with soybeans on the road outside our apartment block.  The neighbours must have wondered what the heck the idiot foreigners were up to.  An empty cup brought me back to the present.  Another Setsubun was over.  Time to call it a night.  The biting cold that descended as I stepped away from the flames carried no hint of the promised spring.