Home » Nature » On the cabbage trail 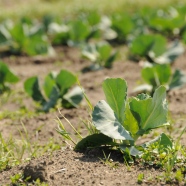 On the cabbage trail

Posted by Claire Usmar on March 15, 2012 in Nature, Uncategorized | Leave a comment

Most recent lesson learnt: When a March weather forecast predicts low wind speeds, don’t trust it as far as you can throw it.

Though spring has arrived the wretched winter winds just won’t take a hike.  As promised by Yahoo Weather, Sunday was a perfectly sunny day with not a cloud in the sky.  Being the first sunny day on a weekend in three weeks, the saddle was calling my name and I heeded its call with relish.  But my joy was short lived. 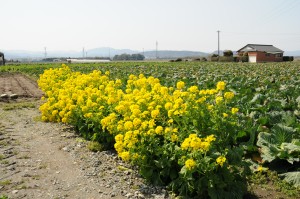 On Yahoo Japan, the wind speed forecast is broken down into three-hour blocks.  Happy biking weather is 3m/s (approx. 10km/h) and below, which was what the forecast was promising.  But Sunday whipped up into 9m/s (32km/h) and above. Not so bad unless you’re riding head first into it as I was. 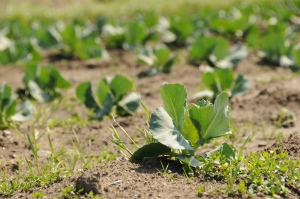 My destination was to have been Hakusan, the western most of the three towns that make up Tsu.  Wishful thinking on my part, for as soon as I got out into the open fields the wind tried unrelentingly to make me friends with the ground.  Though it didn’t succeed, I beat a hasty retreat home completely worn out from fighting with nature yet again.  A westerly wind is Tsu is an unconquerable beast. 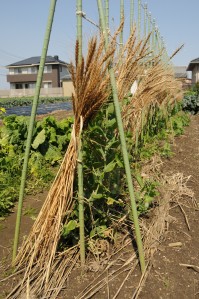 In spite of my plans being derailed, I did manage a few enjoyable hours in the saddle meandering through the streets around Momozono.  Everywhere the signs of spring’s strengthening hold were evident, in random riots of pink, white and red from the plum blossoms blooming in backyards, to rows of newly planted cabbage in fields next to those just harvested.  Some of the frailer plants now being planted out, like green peas, get their own windbreaks, given how fickle spring weather is in these parts.  Where can I get one for me?

While not ideal for biking, Sunday was perfect for harvesting and given all the rain we’ve had of late, the farmers were out in force to make the most of it.  A small fleet of ubiquitous tiny white farm trucks (think minivan with the back top half removed) were whizzing about through the fields here and there collecting the harvested produce that had been left boxed up along the roads. Sunday’s produce of choice to harvest: cabbage.  The smell from fields of rotting cabbage assailed me as I biked by.

Cabbage is a major winter crop in Japan and unsurprisingly it creeps into all manner of dishes and salads.  On my first visit to Japan, I’d eaten out every night of the five weeks I was here and I’m pretty sure that cabbage, finely shredded and raw, accompanied every one of those meals.  At first, I couldn’t get enough of it.  Four years later, I will only touch the stuff under much duress.  There is only so much raw cabbage one can handle no matter how delightfully crisp and sweet it may be.  But guess what was masquerading as lettuce in my lunchtime salad today?

← Spring stirs One year on →