Posted by Claire Usmar on November 11, 2012 in Cultural, Features | 1 Comment

Add crowds, a plethora of food stalls and pumping music to a riot of colourful costumes with a dash of city pride, and what do you get?  The two days of fun times that is the Tsu Matsuri (祭 – festival).

Tsu might be a small and very quiet town, but, come the long weekend in early October, it shatters that image putting on a deafening festival that could hold its own against any across Japan. Alas its timing is less than brilliant. Our ‘big brother city’ up the road, Suzuka, steals top billing every year because the Japan F1 Grand Prix comes to town that same weekend. But the locals are a loyal bunch.

The colourful centrepiece of Tsu’s festival is the yosakoi ( よさこい) competition. Originating from Kochi Prefecture in 1954, yosakoi is a form of team dance that combines traditional dance movements with traditional or modern music – seemingly the louder and more upbeat, the better. Yosakoi grew out of the traditional bon odori (盆踊り), mass dances that are held in summer during Obon (お盆), the most sacred time of the year for Japanese Buddhists.  Obon is a time to honour the spirits of one’s ancestors and traditionally, bon odori are supposed to welcome the spirits of the dead back to this world.  These days, the dances tend to celebrate summer as much as religion.

In the Tsu yoskakoi competition, teams dance in formation along the street for about 70-100m.  That distance is divided into three zones and choreography is designed around that structure.   Each dance last for about 4-5 minutes.  After dancing until they drop in front of judges all day Saturday and Sunday, the top 10 teams then re-jig their dances for an on-stage performance and dance it out for the top spot before a packed crowd outside city hall.

Tsu’s competition isn’t bogged down by constrictive rules that force competitors to stay true to traditions.  Teams don’t have to use naruko ( 鳴子 – traditional wooden clappers which are synonymous with yosaikoi) and neither costumes nor music need to be traditional.  Yosakoi dancers wear either stylized yukata ( 浴衣 – light weight kimono) or happi (法被 – a lightweight open overshirt), many of which are designed to permit a partial costume change mid performance.  Additionally, some teams bring their own sound system in the form of converted flatbed trucks stuffed with gigantic speakers.

These jikata-sha act as a means of self promotion since the trucks are decked out to match the dancers costumes and they sometimes carry team leaders who sing and encourage their team. This year’s winners certainly threw tradition out the window.  Japanese tradition at least.  They opted instead for a Native American Indian theme.  Unusual?  Yes, but previous themes for that team have included ‘Arabian Nights’ and ‘witches & devils’. 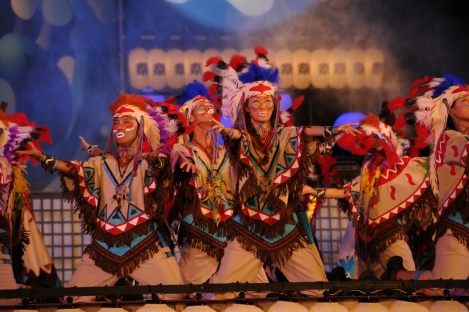 This flexibility is perhaps part of the festival’s success.  I’ve been attending this festival since 2010 and every year the competition becomes more intense and the entries keep pushing the limits of creativity. In addition to plenty of teams from Mie and across Kansai, other teams come from all over Japan as guests, many from Hokkaido, and for the past two years there’s even been a special guest team from a university in Taiwan.  In fact, universities provide quite a few of the teams, especially the more populous ones.  The prizes on offer would certainly make student life pretty good – 30kg of prime Matsusaka Beef (our local equivalent of Kobe Beef), a year’s supply of beer.  Got to love having food companies as sponsors.

Of course I don’t deny that I might be slightly biased in my praise of Tsu’s festival, but what really puts it above other bigger festivals is that you can get right up close to the action – as in the dancers practically dance around the obstacle that is you perched on the side of the road.  For the photographically inclined, this is as good as it gets. 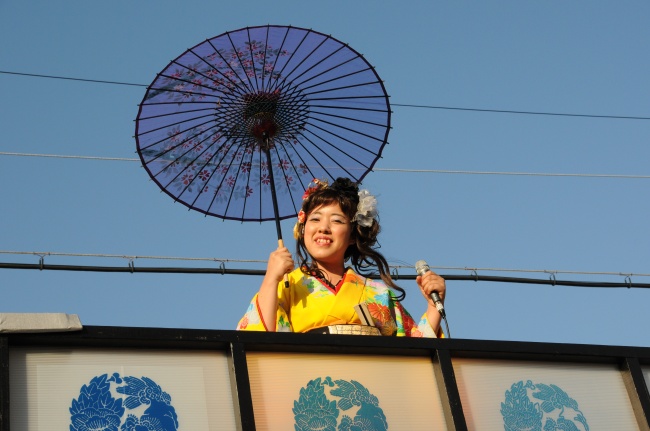 ← Stone Mountain Bolt from the blue →