Posted by Claire Usmar on December 8, 2012 in Cultural, Features | Leave a comment

Forget all the futuristic technologies and oddities that have forged Japan’s modern reputation as ‘cool’.  The Land of the Rising Sun was cool way before then.  Since around the 13th and 14th centuries AD, to be precise.

Yabusame (流鏑馬) is a ritualised form of mounted archery where would be warriors demonstrate their prowess whilst dressed as though they stepped straight out of the samurai age.  Not one piece of their clothing, equipment or even the horse’s tack (saddle and bridle) has been modernised.

Yabusame originated in the Kamakura Period (1185 – 1333 AD) as a military drill but developed into a religious ritual designed to please the gods and so ensure everything from a good harvest, to success on the battlefield. Ritualised or not, I don’t think I’d fancy my chances of living if one of these archers was riding me down. Today, though archery skills are not essential to daily office life, yabusame still remains a deeply religious affair, presided over by Shinto priests, priestesses and other religious officials.

Every year on November 23, Labour Thanksgiving Day (kinrou kansha no hi – 勤労感謝の日), a small shrine in the north of Mie holds a yabusame festival that is famous throughout the Kansai area.  It was in fact what first brought me to Mie, when I was holidaying in Kyoto with my mum four years ago.

At Tado Taisha (多度大社), six archers gallop down a roped off laneway just wide enough for their mounts whilst trying to hit three wooden targets. These square targets roughly equate in size to the real target that archers once practiced on – the heads and torsos of their enemies. Hitting three targets doesn’t sound like a terribly difficult challenge until you consider the following: The length of the course is only 218m and the targets are just 65m apart, meaning that the archers barely have time to reload before they are at the next target.  When the horses are galloping flat out, the run last less than 15 seconds.

And guess who was riding the fastest flying steeds?  Pensioners. The finest archers on the day were the oldies.  It takes many years to learn how to use the asymmetrical 2m-long longbows on the ground before archers go anywhere near a horse.  Then, even if they can already ride, they have to learn a new style of riding. 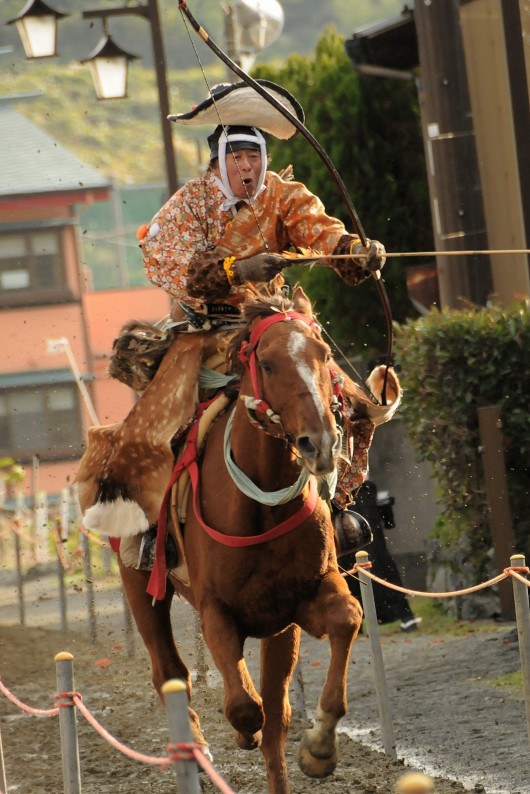 Yabusame requires riders to adopt a riding style somewhat akin to a jockey’s, in that the riders ‘stand’ in the stirrups instead of sitting down in the saddle when they shoot.  In a very unusual move, the youngest rider at this year’s festival was just 16 years old.  Archers so young aren’t normally allowed to ride, let alone take part in an actual festival.  Poor kid didn’t manage notch a single arrow though.

Unsurprisingly, it was to the grey-haired archers that the ‘real’ arrows were entrusted.  Normally, special ‘turnip head’ arrows are used for yabusame.  They are designed to splinter the target on impact with a satisfying ‘thwack’ thanks to their bulbous tip.  The tip sometimes also has four holes in it that produce a whistling noise as the arrow flies through the air.  This sound, along with the thwack on impact, is said to call to the gods and purify the area.

A barbed arrow with whistling holes.

For those archers with superior skills, vicious looking v-shaped barbs are added to the tips of their arrows.  Instead of cleanly splintering the targets, the barbs shred them, producing a confetti-like shower of woodchips on impact. One wouldn’t think you’d have to be careful about who has the pointy arrows. I mean they would keep people watching on out of harms way, right?  Not quite.   Priests and other officials sit within 10 meters of each target, so a misfire with a barbed arrow probably wouldn’t end well. Spectators, too, are allowed close enough to the action that if you leaned out far enough, you could almost touch the horses as they charge past.

At the end of the day, the shards from the broken cedar targets are collected.  Shrine assistants write the year and name of the event on them then stamp them with the shrine’s hanko (red stamp) before selling them to the public as good luck charms.  They’re said to bring good luck to the household for the coming year.  I’m banking on it. 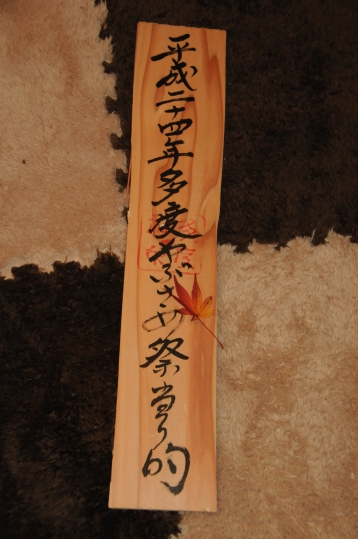