Fancy a hike that’s more like a slightly strenuous stroll upwards with plenty of interesting sights along the way? Then head for Asamagatake in Ise (朝熊ヶ岳, 伊勢). 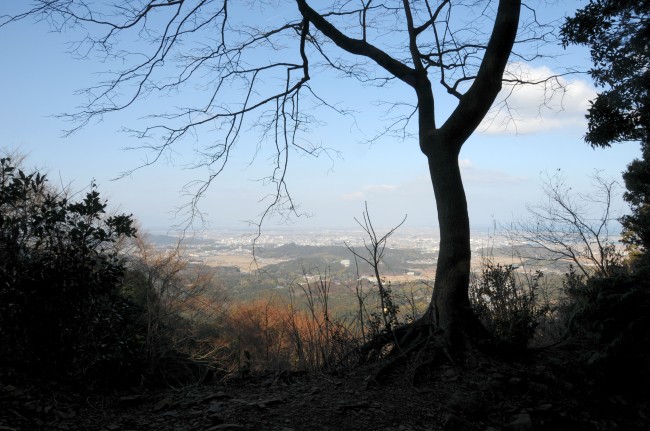 Mie Prefecture has plenty of mountains to offer that are far less daunting than the towering peaks that form the ‘roof of Japan’ in Nagano and Gifu Prefectures.  The tallest peak in Mie is just 1420m tall.  But while that peak mightn’t be very high, it certainly isn’t easy.  Any plan to hike it involves a 7+ hour round trip.

With that in mind, and given that only two of our party of four were serious hikers (make that out of condition hikers), we opted to climb the less daunting Asamagatake (555m) which provides fantastic views across Ise City, Toba and into Wakayama Prefecture.

The trail head is easily accessible from Asama Station (朝熊駅) on the Toba Line (Kintetsu Railways 近鉄 鉄道).  The trail itself is easy too.  It’s well maintained with fences and chains along the difficult areas but it isn’t that kind on the legs as there are lots of small, loose rocks.  However, those pesky pebbles weren’t stopping the army of obasans and ojisans (grannies and grandpas) that we encountered on the trail.

View from the summit

What the trail lacks in challenging terrain, it more than makes up for with plenty of intriguing sites along the way.  There’s an abandoned cable car line, derelict and destroyed houses, two impressive temples, a Buddhist graveyard that’s still in use and of course the obligatory lookout and tourist centre at the top.  Alas lots of these reminders of the past are being lost as the mountain is ‘tidied up’.  Many of the crumbling houses have recently been demolished and condemned to memory, with piles of broken roof tiles the only reminder of their existence. Thankfully the temples have been left largely unaltered.  The older and grander of the two temples is Kongoshoji (金剛證寺).

There has been a temple of some sort atop Asamagatake since the mid 6th century, though the main hall dates from around 1400AD.  Dates asides, the grandeur of Kongoshoji echoes that of Nikko in Tochigi Prefecture (日光、栃木県), north of Tokyo. Nikko is where Tokogawa Ieyasu (徳川家康), the shogun who unified Japan, is entombed.  The s

ame sense of awed silence that Nikko commands pervades the grounds of Kongoshoji, especially around the pond.  The three ancient cedars that flank the approach to the main hall look as though they have been plucked straight from the treed palisades at Nikko. 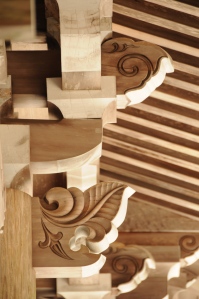 Kongoshoji is actually theologically connected to Ise Jingu (伊勢神宮), the most sacred Shinto shine in Japan.  Kongoshoji is said to protect the inner sanctum of Ise Jingu from any bad luck originating from the north-east, otherwise known as ‘the unlucky direction’. The special kanji for this direction when discussing religious buildings is 鬼門 (きもん), which literally read as ‘devil gate’. Since ‘oni’ (鬼 – devils) are said to have the horns of an ox and the claws of a tiger, both of those Chinese zodiac animals are honoured at Kongoshoji.  Honouring them here in turn strengthens defenses against devils and other sources of bad luck that might try to reach Ise Jingu from the north-east.  Sounds like quite a task for a relatively unheralded temple.

When hiking Asamagatake, set aside at least five hours for the round trip.  We would have dwelled longer if the wind hadn’t compelled us to keep moving to stay warm.  But don’t despair if hiking isn’t your thing.  There is a road to the top.  The Ise-Shima Skyline (伊勢志摩スカイライン) starts in Toba (鳥羽) and winds its way right past Kongoushouji up to the observatory.  So no excuses not to visit now.

Foot onsen with a view

← The strawberries are coming! A sugary obsession →