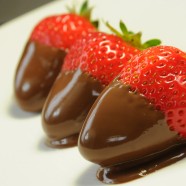 Posted by Claire Usmar on February 26, 2013 in Features, Nature | Leave a comment 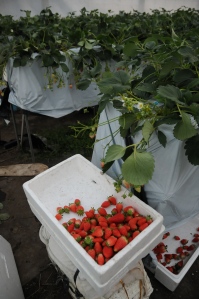 Winter in Japan might mean many things to many people – snow, skiing, having to wear far too many layers of clothing just to stay vaguely warm. But to me it means just one thing: strawberries.

Japan is more than a little strawberry obsessed. There are umpteen different varieties ranging from the enormous Bijinhime (Beautiful Princess) which can weigh more than 100g per berry, to Hatsukoi no Kaori (The Scent of First Love), a completely white variety that are sold by the each in department stores for a minimum of 500 yen. If you’re feeling particularly cashed up, a tray of just 15 perfect strawberries will set you back 12,600 yen.

Regular ‘ichigo’ (苺) start appearing in the shops at the end of November, just as winter starts to take hold. But their story began way back in mid-September. It was then that the farmers like my friend from Isenakagawa first started planting out their greenhouses. Recently, he invited me to check out his greenhouse one Saturday afternoon and sample some produce whilst learning a thing or two about growing strawberries. 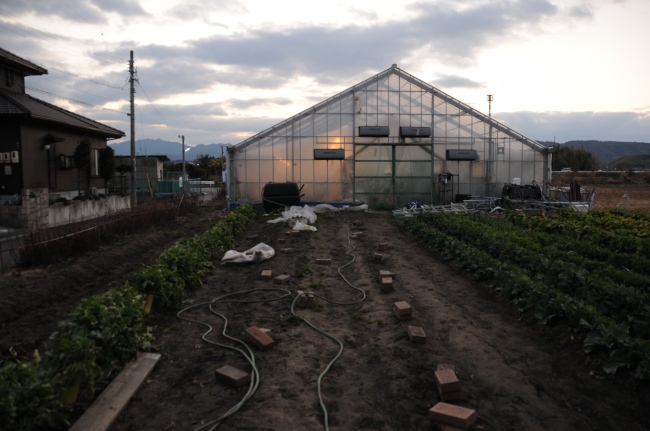 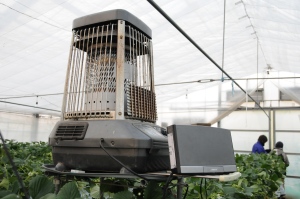 The sun is fast disappearing behind the mountains as we leave his adorable whirlwind of a black Labrador Rio behind and follow the mini quality controller, his bubbly 6 year old daughter, into a humid sea of waste high greenery enveloped in two layers of plastic. Commercially, strawberries tend to be grown in greenhouses given the severity of winters in Japan. To keep the plants alive, they must be protected from below zero temperatures. A massive gas heater in the centre of my friend’s greenhouse helps keep the strawberries snug, albeit at around a brisk 20C overnight.

My friend, Kats, has been growing strawberries for nine years as his winter crop while his rice fields sit empty and he’s got the process down to a fine art. He grows his Akihime cultivar

(the most popular variety around my area) strawberry plants in quasi hydroponic planters on raised benches. The hydroponic fertilising system gives greater control over delivering nutrients to the plants growing in a carefully prepared soil mix, while the raised benches make picking easier. 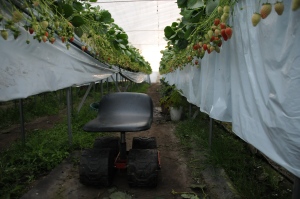 In fact, Kats harvests them from the comfort of his ‘wheeling chair’ listening to music from a radio next to the heater. Not sure who the music is for. I suspect both parties are partial to the dulcet tones of soft jazz. My friend spends four hours a day from November to April picking which can translate into 4 tonnes of strawberries each season. But to produce such a haul, the strawberry plants never ‘sleep’. Once the sun sets, they continue growing under lights until dawn. 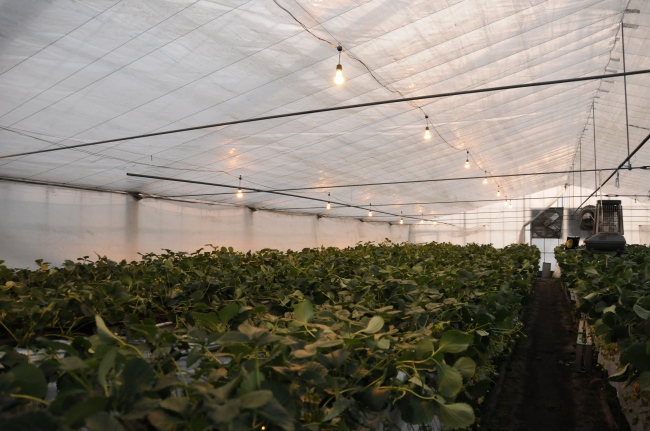 That’s quite a difference compared to how strawberries are grown in Australia. Back home, they are grown in the ground, out in the open and are left largely alone. The cost of growing strawberries using the Japanese system would be prohibitive and consumers sure wouldn’t be willing to pay more just because the resulting fruit looks ‘pristine.’ Australian strawberries taste and look vastly different too. They are far tarter and tend to be red inside and out. kihime strawberries, and many other Japanese cultivars, are almost white inside even when ripe. Yet despite looking unripe, Japanese strawberries win hands down in the sweetness stakes. They are in my opinion the epitome of sugary perfection. It’s almost as if someone added sugar and a dash of strawberry flavouring to them. 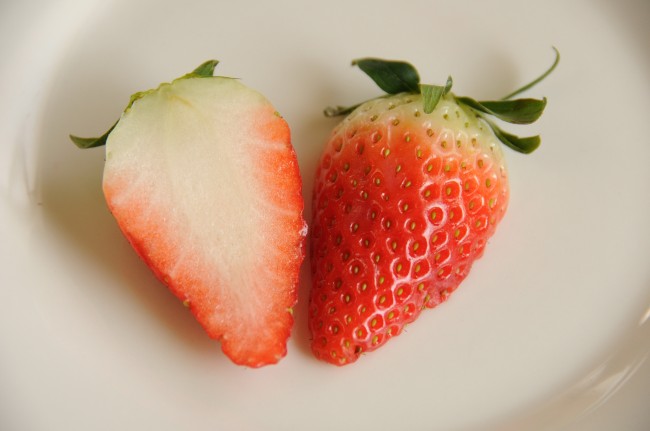 But for all the care and attention Japanese strawberries receive, there is a sad side to this tale. Japanese strawberries are terribly fragile. They damage very easily and have a short shelf life, so consequently there is almost no export market. It’s a huge shame that the world can’t taste Japanese strawberries. But at least I don’t have to be sad about leaving my friend’s farm because now I have my own crop coming along – inside my apartment. Worry not Kats, they are being well looked after with special lighting until late, their own heater and plenty of TLC. Hope that translates into loads of strawberries. 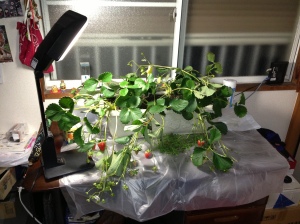 ← Protect the Oni Gate Bring on the blossoms →