Home » Cultural » Not quite off and racing 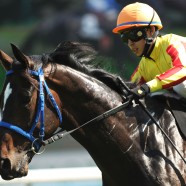 Not quite off and racing

Posted by Claire Usmar on May 29, 2013 in Cultural, Features | Leave a comment

There’s not a spare inch of space left along the vast grassy straight as the moment of truth draws near. The enormous 80,000 strong crowd gazes expectantly as one at the gigantic 64m-wide screen. In unison, they raise their hands and begin rhythmically smacking their rolled up newspaper guides into their other hands. The mesmerising “twack… thack… twack…” quickens along with their heartbeats. As suddenly as it began, it reaches a crescendo as suddenly a roar of anticipation bellows forth from the crowd. The gates fly back and the gallant four legged chargers dash away headed for the winning post. Welcome to the horse races in Japan. 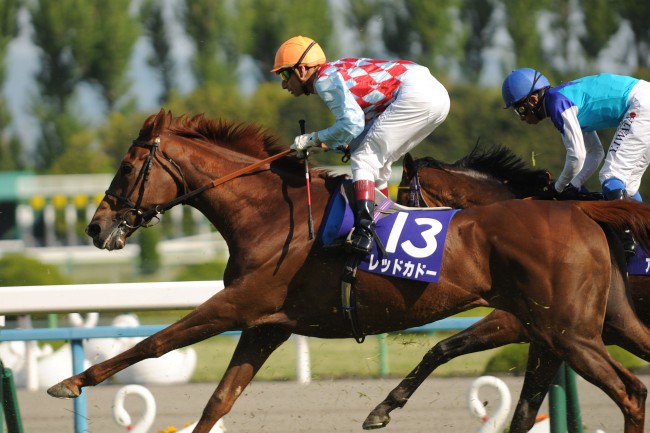 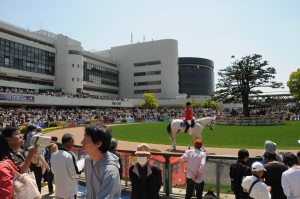 Horse racing in Japan is very unlike racing anywhere else in the world. Here the sport which traditionally celebrates competition between all comers, be they kings, business tycoons or regular people, has been turned on its head. In its place is a strange mix of fast food, family play areas, gigantic grandstands and of course Hello Kitty. So let’s take a tour of Kyoto Racecourse on its biggest race day of the year, Tenno Sho Spring day.

Kyoto Racecourse, Kyoto Keibajou (京都競馬場), is located about halfway between Kyoto and Osaka, and should rightly be described as Japan’s version of Flemington Racecourse in Australia. The grounds are open, the track sweeping and expansive, and on days when the best races are on, you’ll find crowds of over 80,000 people on course. 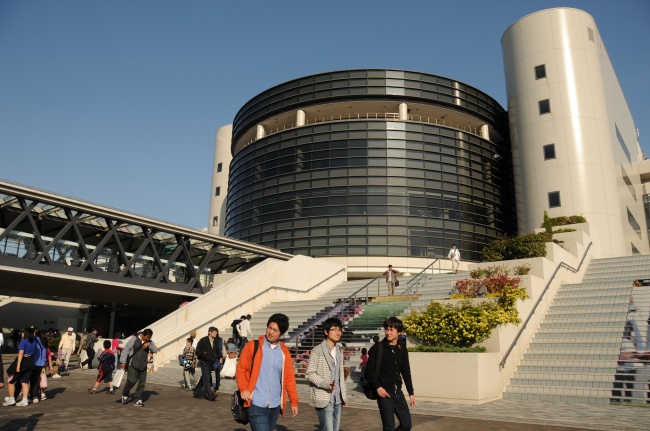 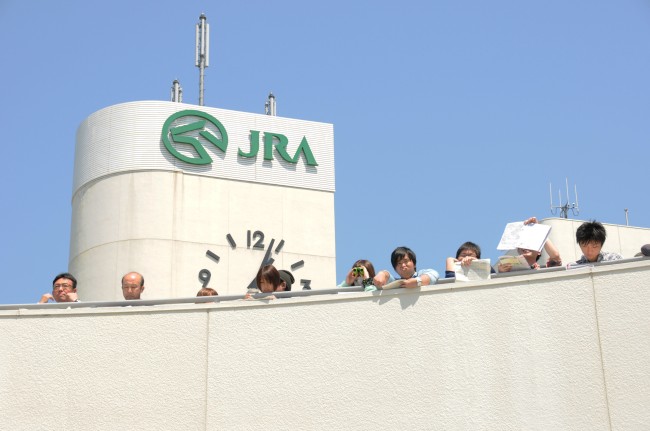 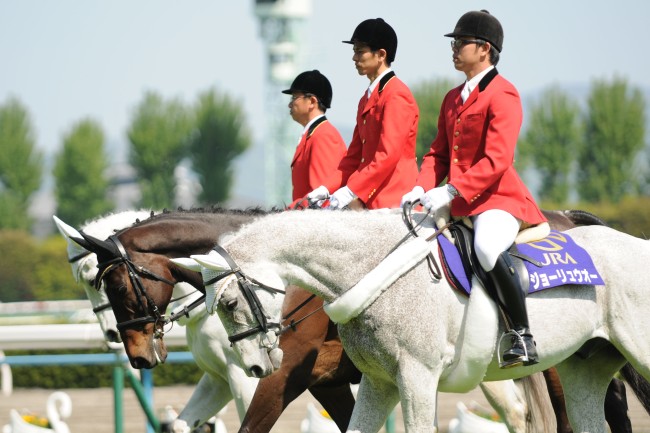 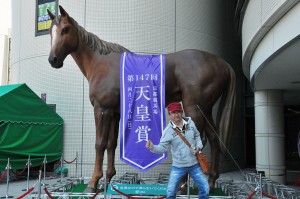 In Japan, horse racing is most definitely sport where the elite compete as owners and the ordinary Joe just watches and gambles, cheering on his favourite four-legged champion. That is one of the defining elements of racing in Japan – the devotion of punters to their favourite horse.  Australia has just experienced this phenomenon courtesy of Black Caviar. But here in Japan, that level devotion to a horse – perhaps not with the same singularity – is common place. You will often see devoted fans wearing copies of racing silks or carrying soft toy versions of their champions – versions which sometimes fall foul of their owners should their namesake not perform well. At this year’s Tenno Sho, hot favourite Gold Ship, a spectacular grey horse, failed to run a place, to which one devotee responded by hurling her mini plush Gold Ship to an undignified watery end in the moat at the edge of the grass track. 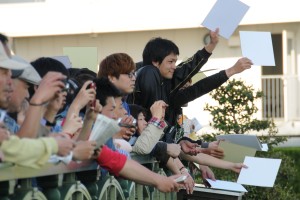 Jockeys too get the rock star treatment. After each race, fans commandeer a short section of the fence near the presentation area, frantically waving signature boards trying to get the winning jockey to come over and sign a few. Unlike in Australia, where it’s not uncommon for jockeys to win several Group 1 races (the most prestigious races) in a season, the strike rate of Japanese riders in those high profile races is far lower, making getting a signature from the winning jockey on the day just that little more special, especially so if he’s from overseas like Australia’s Craig Williams.  He won the Tenno Sho Spring back in 2010 aboard Jaguar Mail. 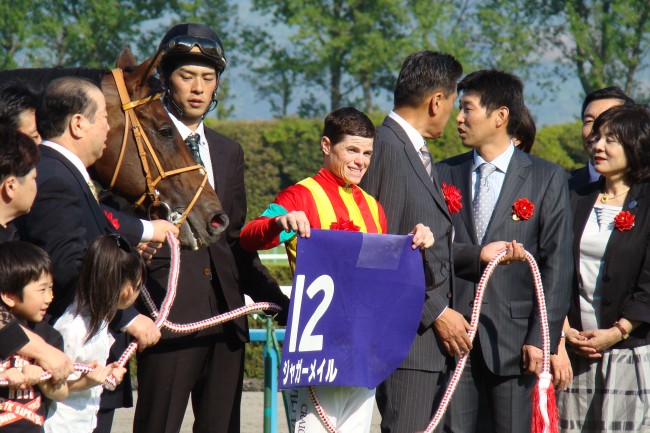 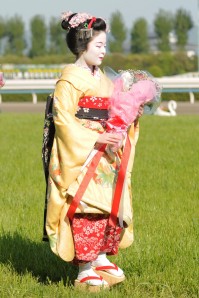 The other defining element of racing in Japan is gambling. The sporting and social spectacle that we in the west are familiar with, where patrons go to the races dressed to the nines for a day-long party just doesn’t exist here. Instead, racing seems to exist solely for the purpose of gambling, since it is the only sport on which people can legally gamble here in Japan. I can’t tell you how odd it is for me, a race goer who’s used to putting together outfits for special race days, to go to the races in jeans and a polo shirt. While dressing up for the races isn’t everyone’s idea of a good time, its total absence leaves one feeling strangely empty, like a day at the races here is something of a faint, muffled echo of its flashier overseas cousins. One really misses the sense of fun and whimsicalness that abounds on big race days, particularly on Tenno Sho Day, for this race is Japan’s equivalent of Australia’s Melbourne Cup, a race so popular that the entire nation stops to watch it.  The only people dressed up on Tenno Sho Day are the celebrities enlisted to present the winning connections with their trophies and the maiko, trainee geisha, who present bunches of flowers during the ceremony. This year’s celebrity elect was Ichikawa Ebizo XI, arguably the most famous kabuki actor in Japan. 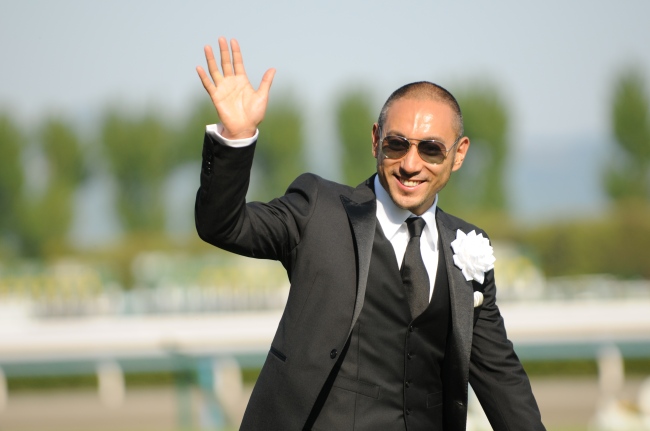 Ebizo on his way to present the trophies. 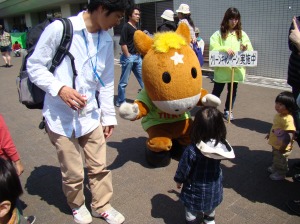 If you stay at the fence by the home straight between races in Japan, all you have to admire is people sitting on the ground hunched over their form guides studying them intently before the next race comes around. But if you venture a little past the grandstand, instead of exclusive and ritzy marquees full of the who’s who of the social set, you’ll find a wide green area usually full of families making the most of the open space. The grassy area is surrounded by fast food stalls, a pony ride area and the Turfy Shop. This is where Hello Kitty comes in. ‘Turfy’ is a little cartoon chestnut race horse with a perfect white star on his forehead. He is the Japan Racing Association (JRA) mascot and he was designed by Sanrio, the company that owns that aforementioned white mouth-less cat that is synonymous with Japan.  Unsurprisingly, this mouth-less duo are great mates and team up to feature on all manner of merchandise, from cookies to stationary. Though perhaps die-hard racing fans might prefer underpants featuring the racing colours of their favourite horses. It’s here in the gift shop that the day at the races winds up for most patrons, as they search for omiyage, somewhat obligatory gifts that one should buy for colleagues and friends when they visit somewhere special. Those racing underpants would sure make for an interesting memento of one’s day at the races in Japan.

← Ready for that stage again Setting out →