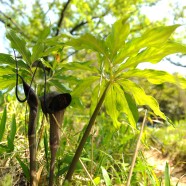 Posted by Claire Usmar on July 1, 2013 in Nature, Quick bites | Leave a comment

Bet you can’t.  Wildflowers in Japan abound but you’ll have about as much chance spotting them as catching a glimpse of a geisha in Gion.  Just like the ‘flowers of the night’, Japanese wildflowers can be highly localised and their seasonal show very brief. Alas whenever I’ve gone in search of the rarer blooms, they’ve remained elusive.

So here instead are three more common examples from Mie Prefecture that are found across Japan.

Urashima sou (ウラシマソウ）: Though technically not a wildflower, the black ‘flower’ of urashima sou (Arisaema thunbergii subsp. Urashima) should give a hint to its infamy. All parts of the plant are considered toxic, particularly the berries that form in autumn.  It flowers in spring and is common in woodlands near the coast.

Setsubunsou (セツブンソウ) – Tiny, yes.  Frail, no.  This little flower is one of the first harbingers of spring here in Japan.  Setsubunsou (Shibateranthis pinnatifida) flowers at the edge of the melting snows up in the alpine regions in February and March.