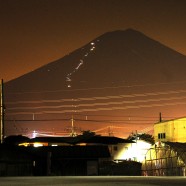 Myth and reality – Climbing Mt Fuji from the very base

Posted by Claire Usmar on August 3, 2013 in Features, Nature | Leave a comment

Myth 1 – Climbing Mt Fuji from the base is impossibly hard.

Reality – It might be a lot longer (20km as opposed to about 6km) but you will have far fewer issues with altitude sickness.  Besides, the route to the 5th Station (where most being their climb) isn’t busy nor taxing, and it’s remarkably beautiful. 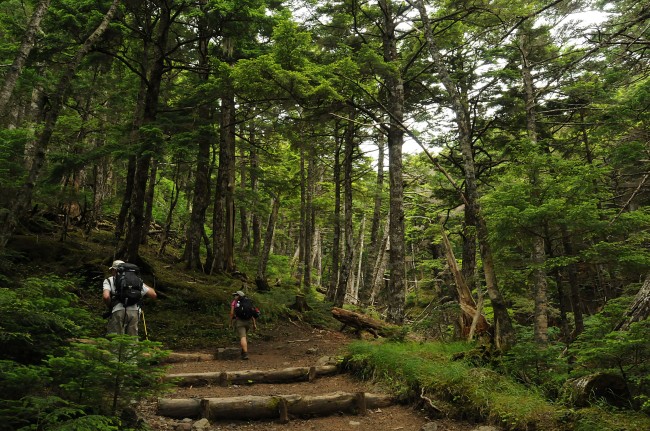 The forest around the 4th Station.

Myth 2 – Almost no one hikes to the summit of Mt Fuji following the traditional pilgrim route from the Kitaguchihongu Fuji Sengen Shrine.

Reality – True, because everybody who passed us was running the trail as part of one last training session before the Mt Fuji Mountain Race that is held in late July.  It’s actually two races starting from Fujiyoshida City Hall:  One a 15km race to the first station, the other a 21km slog to the summit that must be completed within 4.5 hours. We didn’t encounter a single other hiker until Umagaeshi, the jump off point for the 1st Station. 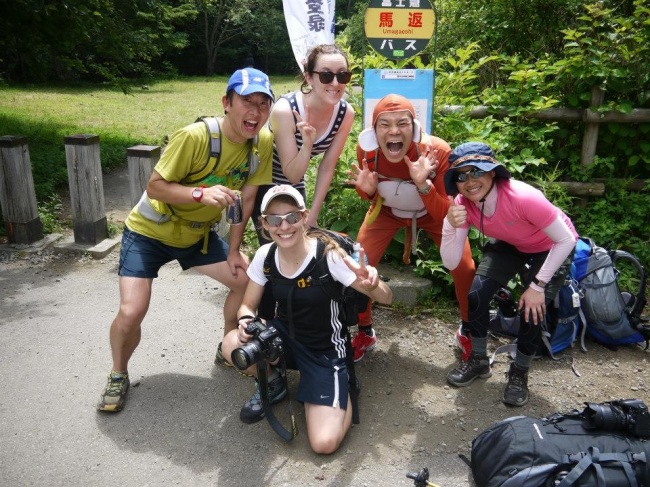 Monkey man and his beer drinking pal after their training session.

Myth 3 (More of an oversight by our climbing party) – The Kitaguchihongu Fuji Sengen shrine is considered the first station on Mt Fuji.

Reality – The shrine is the ‘gateway’ to the trail head of the Yoshida Tail.  The 1st Station is over eight kilometres away. It’s the fifth green dot from the bottom in the picture below – the one that is basically the half way point. 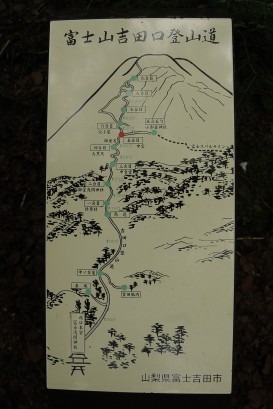 Myth 4 – You will pass four stations before reaching the 5th Station where most people begin hiking from.

Reality – You will see four markers in front of abandoned buildings in various stages of disrepair, most totally derelict. Nevertheless, they are intriguing and their tragic fate only adds to the mystique of the mountain. 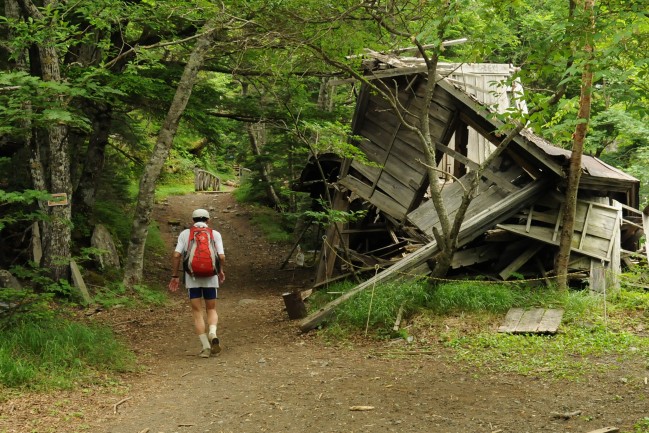 Myth 5 – Many who climb Mt Fuji buy wooden hiking poles onto which they get special brands from each station stamped.  If you hike from the 1st Station, you can collect all the stamps.

Reality – There is no one at the first four derelict stations, so the only way you can get those stamps is by buying the pre-branded sticks at the tourist shops. 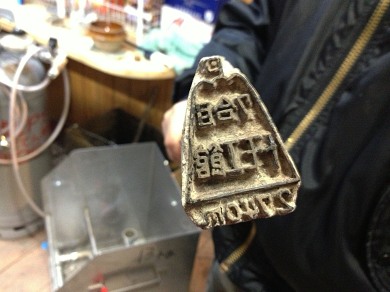 The hot brand for the 7th Station.

Myth 6 – The stations along the trail are very specific points.

Reality – Stations from the 5th up comprise of many huts often a long way apart, aptly named things like ‘8th Station’, ‘Real 8th Station’ and ‘8.5 station’.  Plays havoc with timing your hike because you’re never quite sure when you’ve passed the station that is at times so definitively marked on your map. 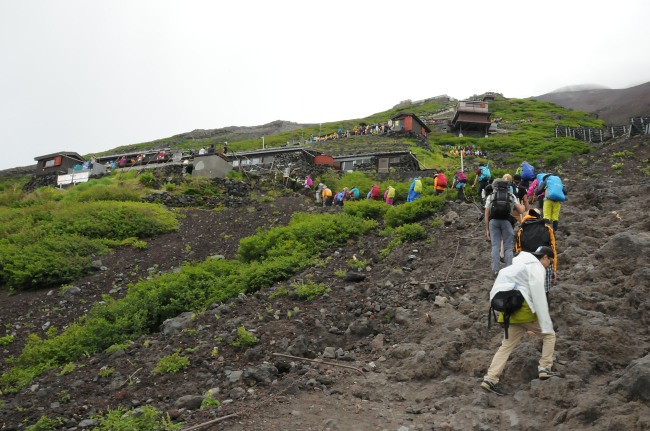 Myth 7 – In the event of bad weather, the mountain huts will allow climbers without reservations to shelter inside.

Reality – Don’t count on it, especially if you’re not in a tour group or Japanese. The weather as I attempted to summit before the dawn was about as bad as I could have envisioned, minus snow, and yet none of the huts were letting people inside.  At the hut where I stayed the night, I saw one Indian man who was looking to pay for a spot to sleep turned away on the premise that ‘everyone was asleep’.  Nobody was doing more than fitfully dozing inside and more to the point, the hut was half empty.  I would not encourage people to patronize Tomoe-kan Seventh Station, nor their eighth station hut.  Tough it out and hike the whole thing in one go lest you get stuck in the human traffic jam and fail to summit in time for the sunrise. 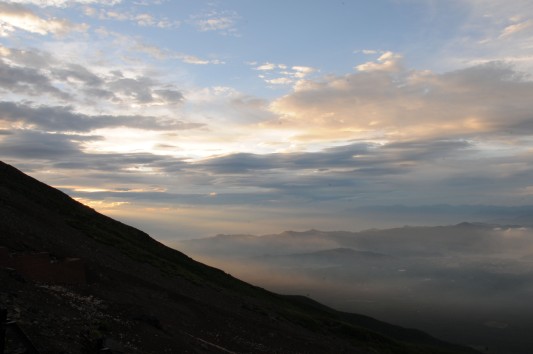 Sunset at the 7th Station.